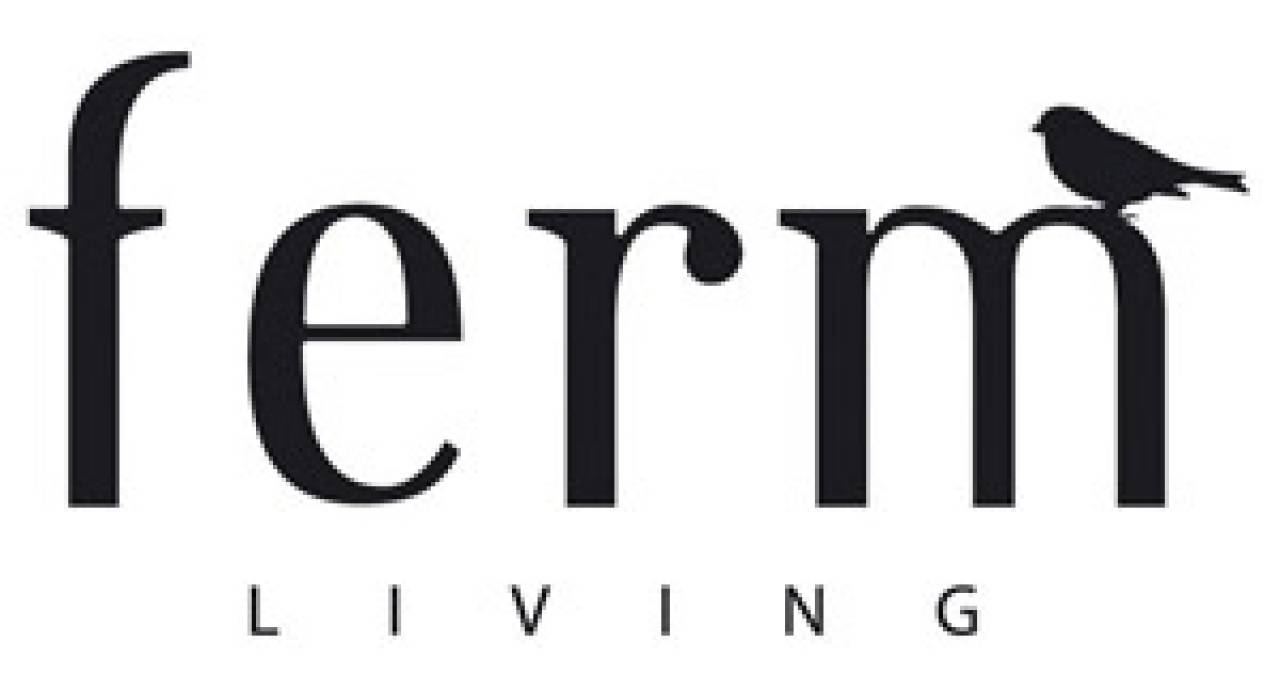 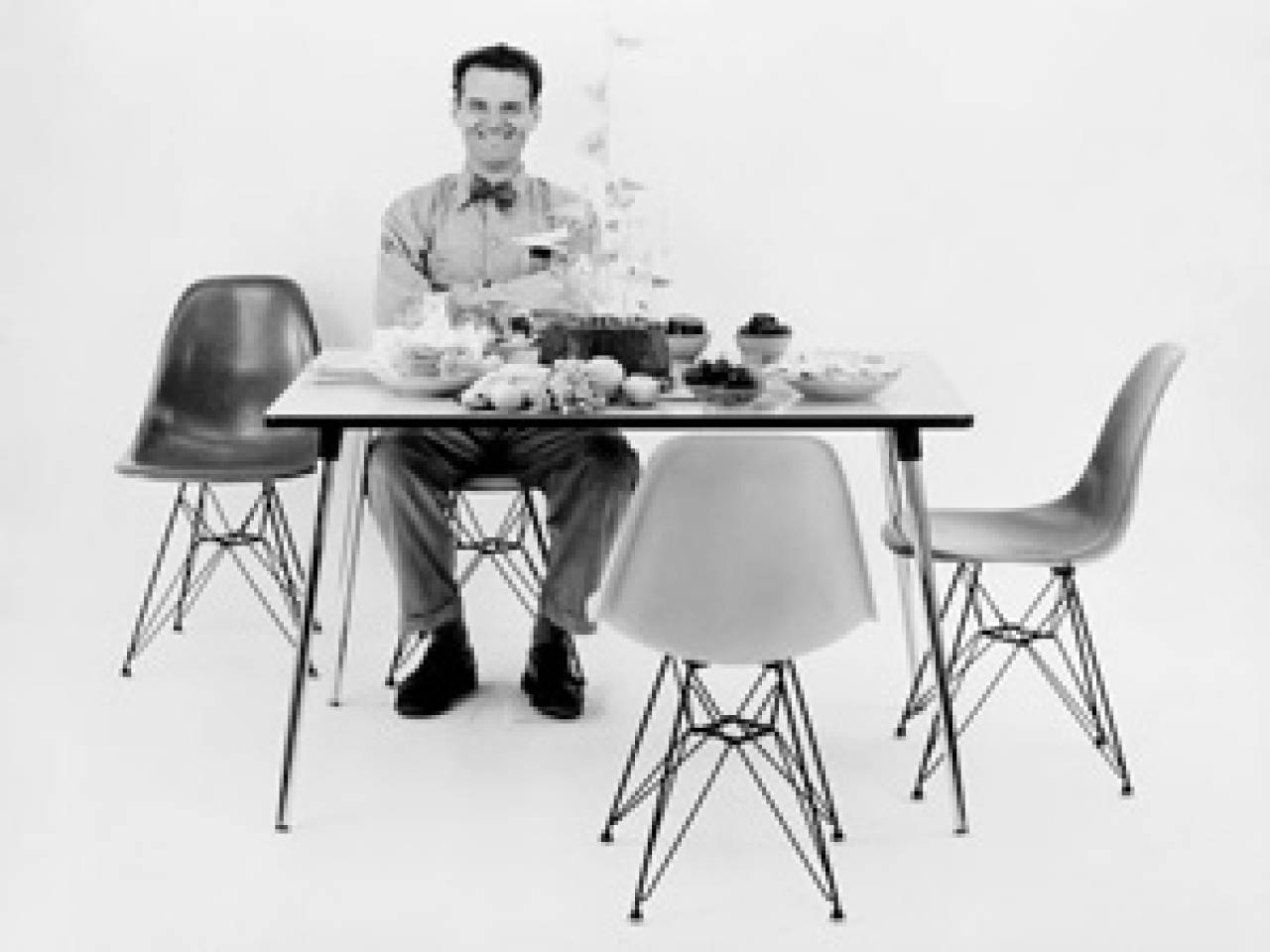 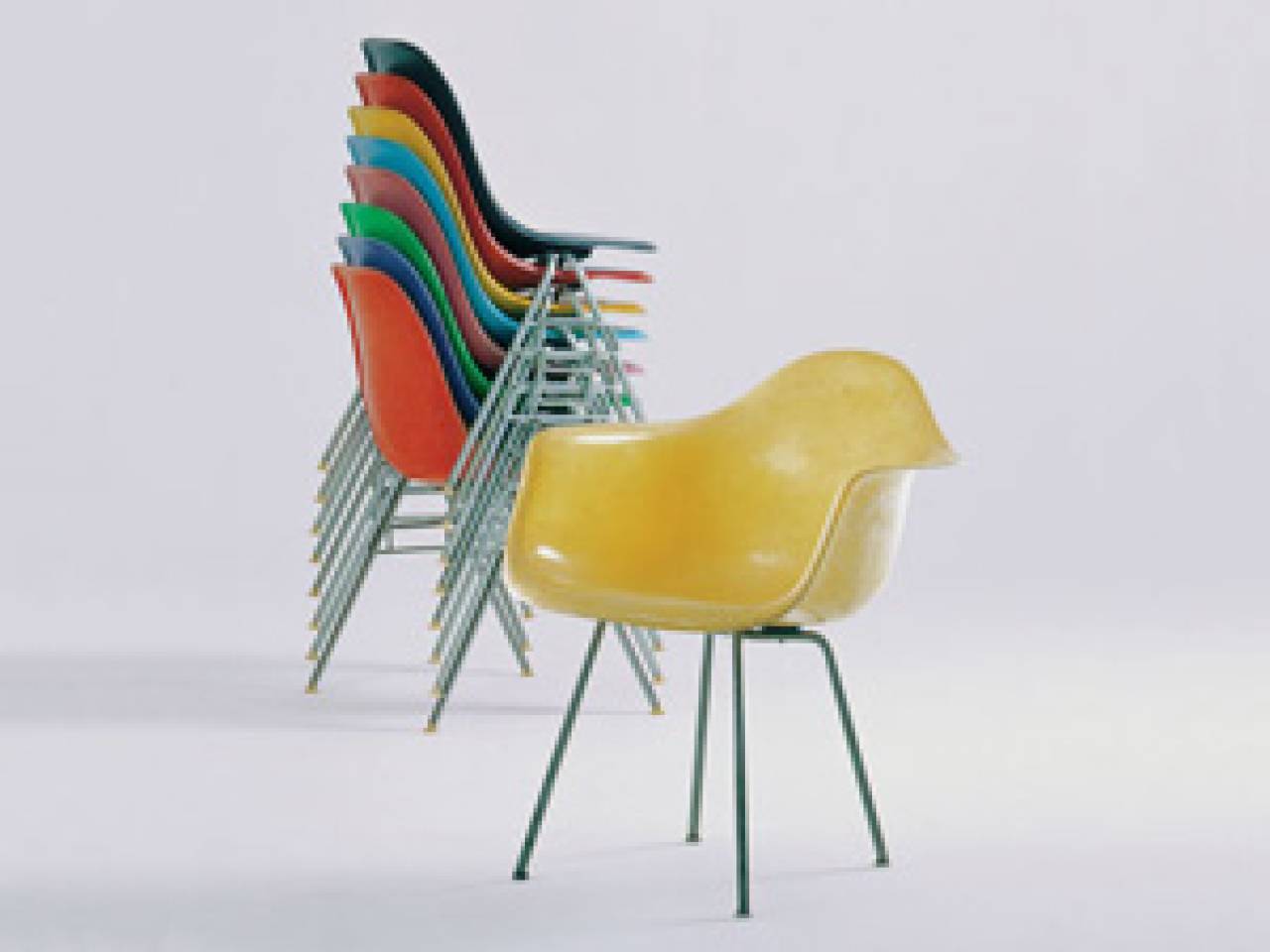 In 1948, Charles and Ray Eames participated in the 'International Competition for Low-Cost Furniture Design', organised by the New York Museum of Modern Art, entering a chair with a seat shell moulded to fit the contours of the human body along with a concept for a variety of bases. Their design won second prize. However, the metal seat shell proved too complex and expensive to achieve successful mass production.

The couple's search for alternative materials eventually led them to glass-fibre reinforced polyester resin, which until then had been primarily restricted to military applications such as aircraft radomes and cockpit covers. The Eameses recognised and fully exploited the advantages of fibreglass: mouldability, rigidity and suitability for industrial manufacturing methods. With this material, which was previously unknown in the furniture industry, they successfully developed the moulded seat shells for mass production: the Fiberglass Chair was born. Its organically shaped, one-piece shell proved to be a much-admired innovation at a time when chairs typically consisted of a seat and backrest. Fibreglass offered the added advantage of pleasant tactile qualities and a perfectly moulded form for optimal comfort. 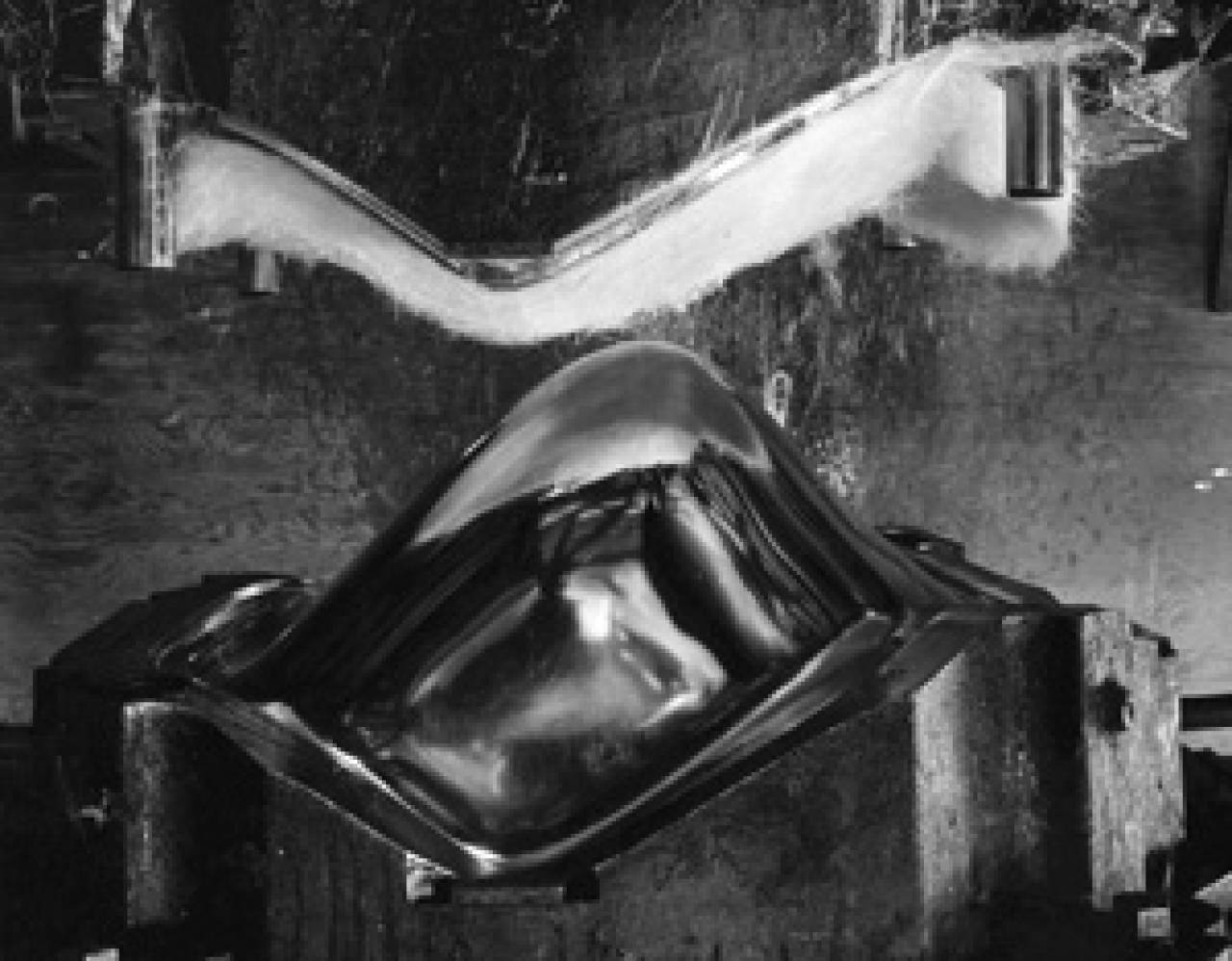 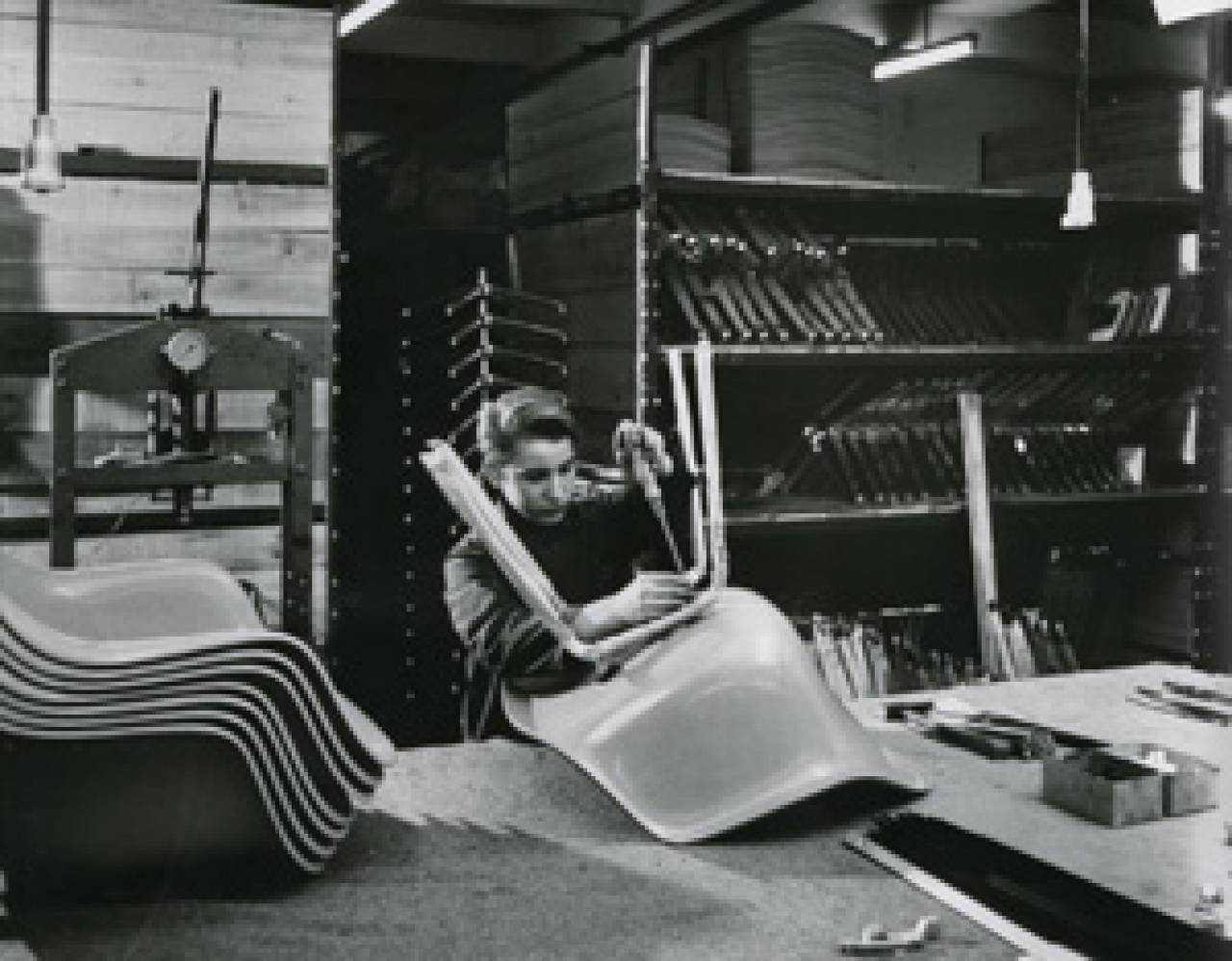 Charles and Ray developed a striking series of individual bases that could be freely combined with these shells – such as the Eiffel Tower version made of welded steel wire or the wooden base reinforced with metal struts. This combination of revolutionary seat shells and innovative bases gave the chair family the iconic traits that are still instantly recognisable today.

Charles and Ray attached great importance to the use of colours – as fibreglass had previously only existed in a colourless version. They consequently spent many days in the factory, mixing hues for countless prototypes in their efforts to create colours that best accentuated the organic shape of both shell forms – with and without armrests – in a range of coordinated shades. The first colours developed by the Eameses were greige (a mix of grey and beige), elephant hide grey (to which Charles was referring when he said 'What I really want is a black with feeling') and the slightly transparent tone parchment. Sea foam green, navy blue, yellow, dark and light ochre, and also red followed shortly after in the very early days of production. 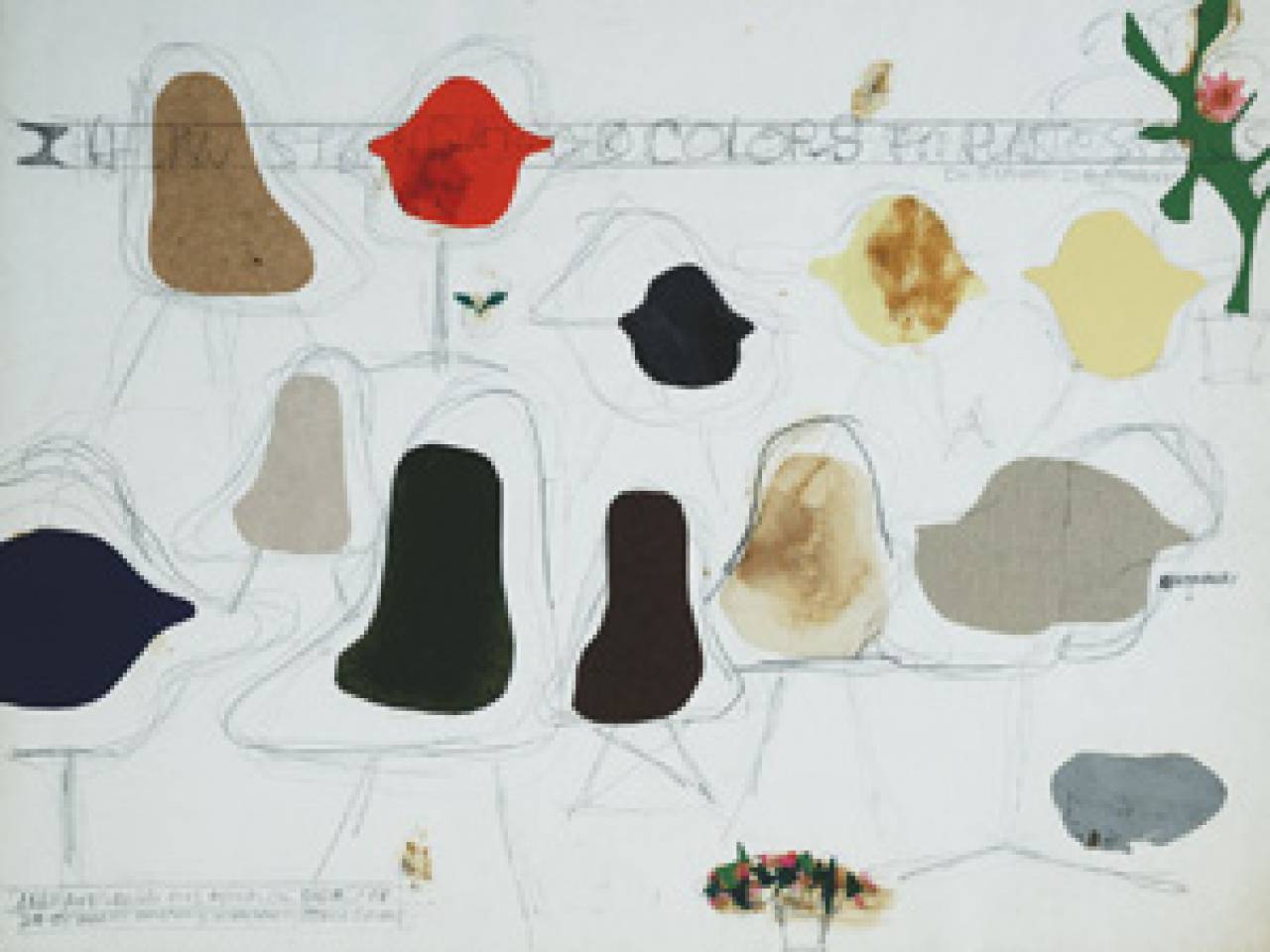 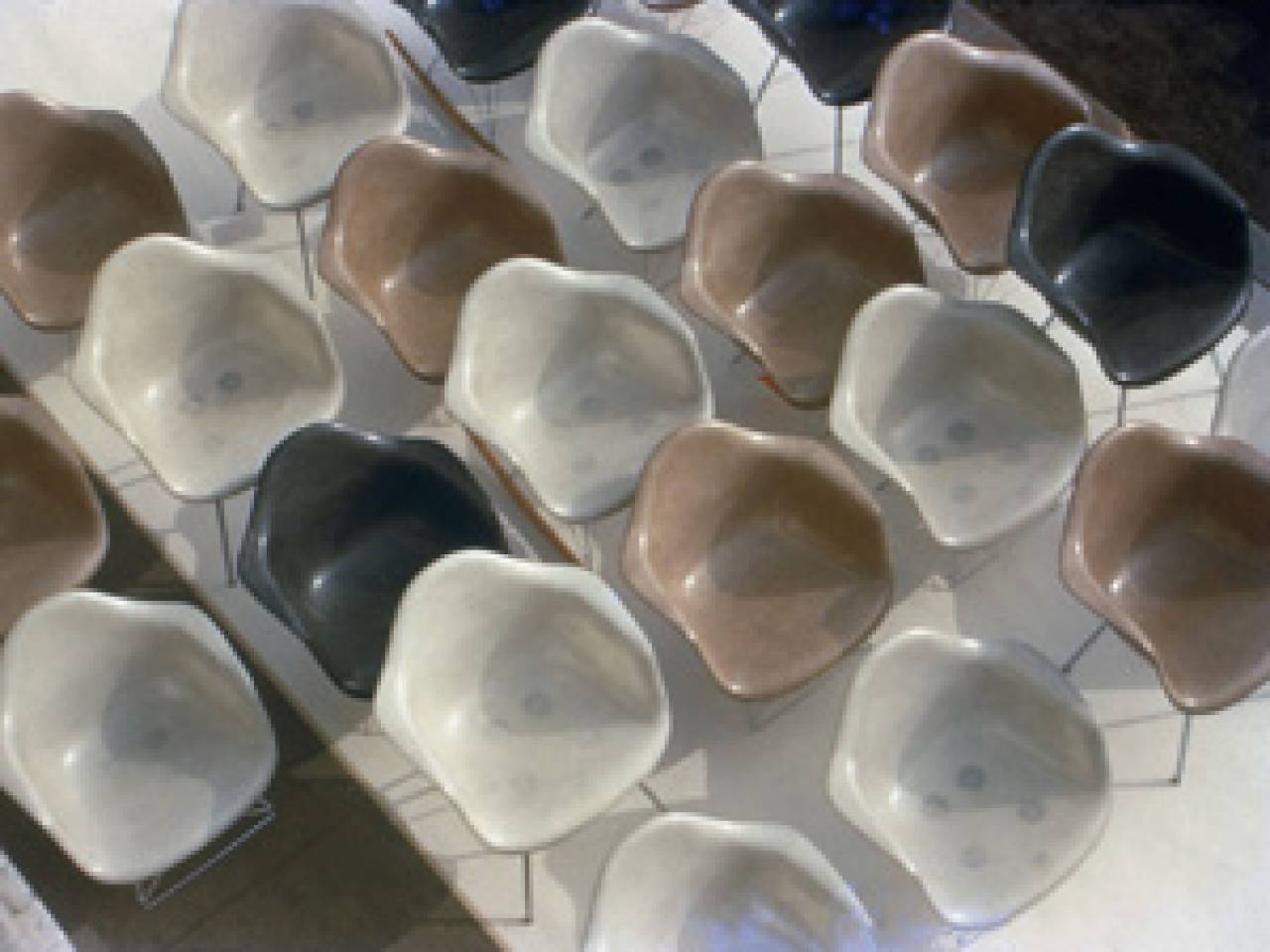 The Fiberglass Chairs were launched on the market in 1950, introducing a new furniture typology that has since become widespread: the multifunctional chair whose shell can be combined with a variety of bases to serve different purposes. In response to the enormous popularity of the chair, the choice of bases and colours was subsequently expanded. Over the course of the following decade, the Fiberglass Chairs became one of the best known furniture designs of the twentieth century. 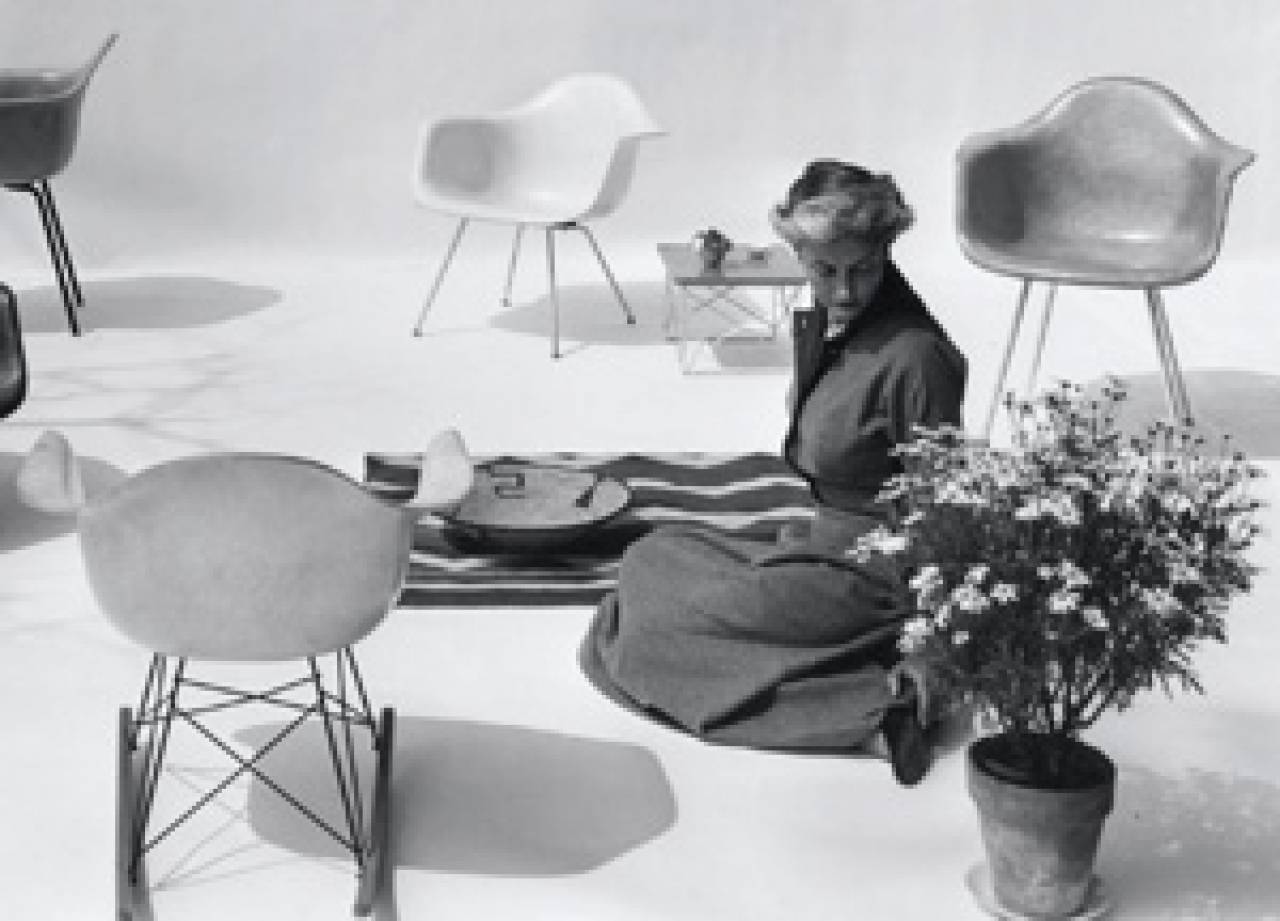 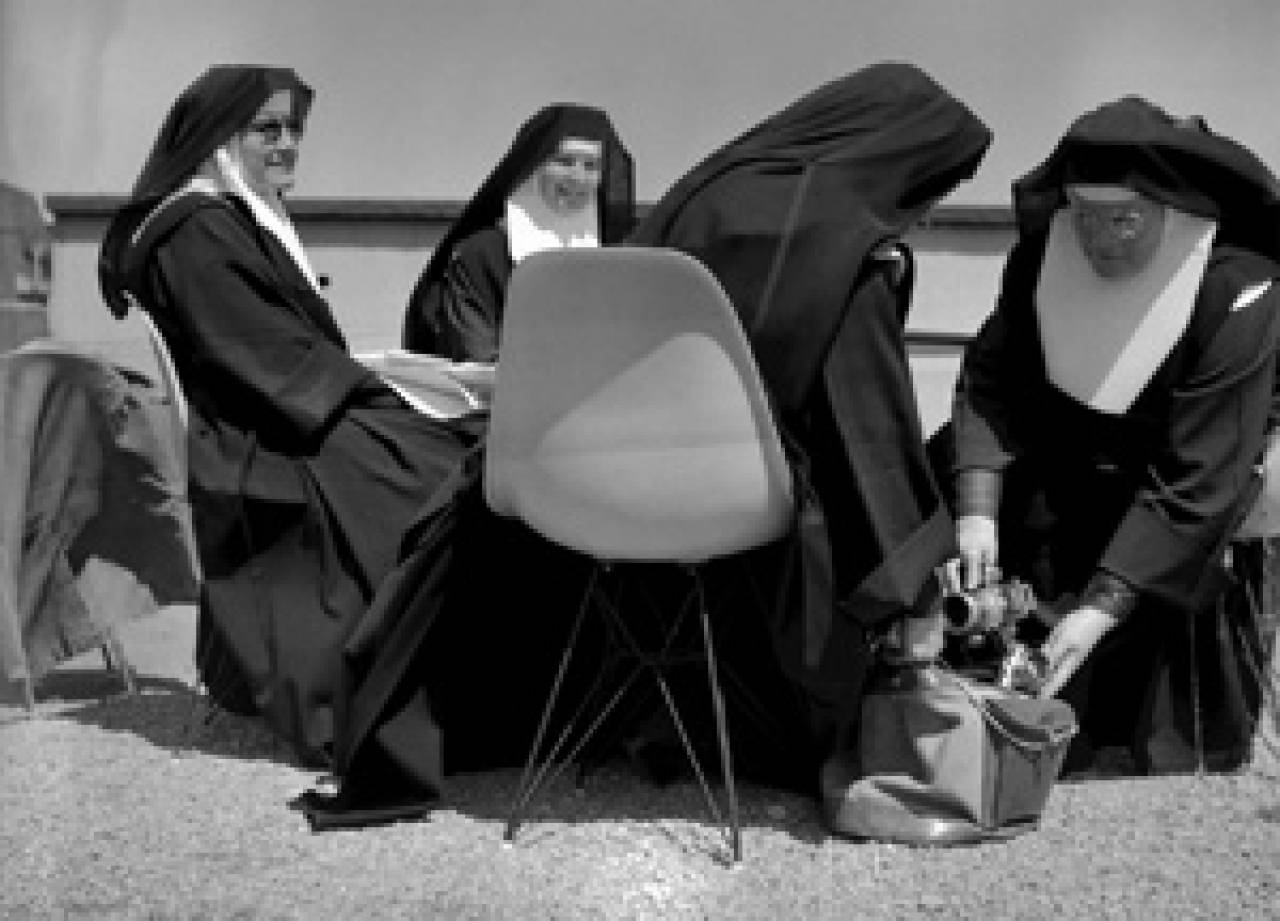 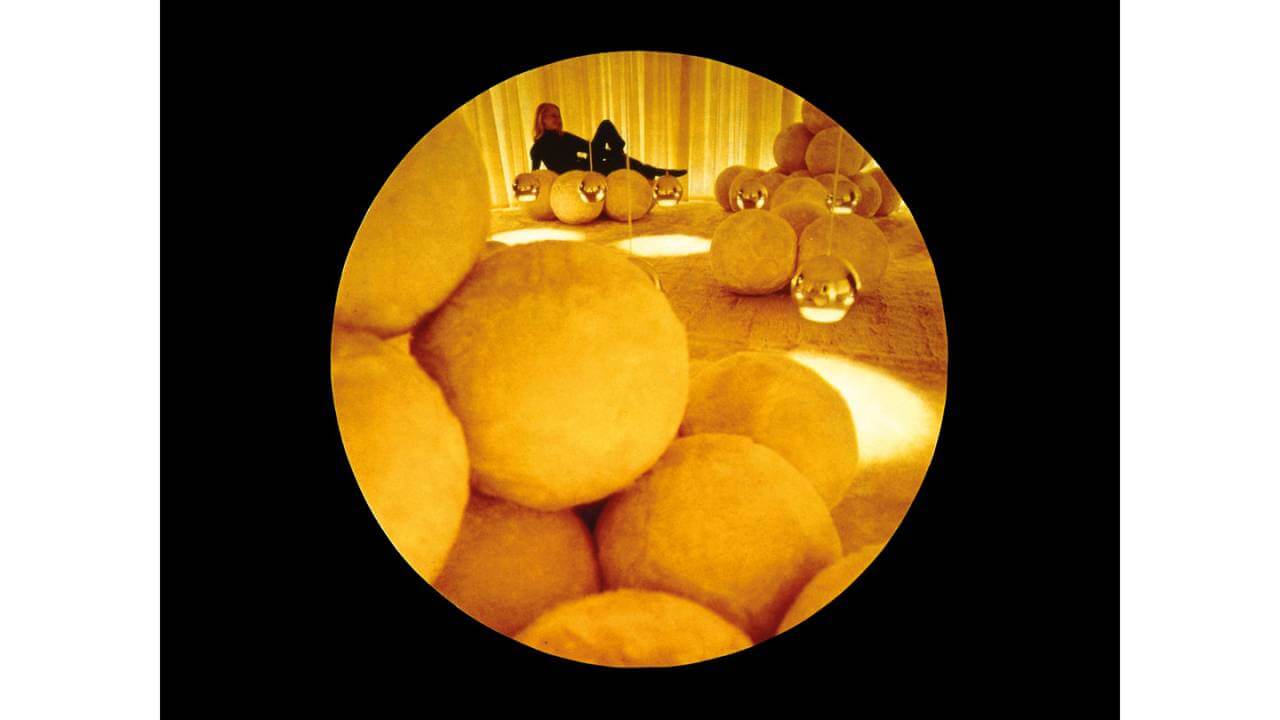 "Choosing Colours should not be a gamble. It should be a conscious decision.

In the book "Notes on Colour", the Danish designer collects his ideas and thoughts on colours. An extract.

"Colours are a subjective, physical perception – they really don’t exist at all. Yellow is yellow only in our thoughts. It is only the function of our eyes that creates colours. Everything in our surroundings has a color – only water (distilled) and schnapps are colourless!"

"Colourless is only what light can penetrate completely. A colour has its origin in the purely physical world. It originates in light rays being reflected from or penetrating a substance. The things we see get their colour and appearance from rays of light.

The rays of light hit an object, are reflected by or penetrate it and are picked up by the eye, Some of them are absorbed by the object thus changing the intensity and composition of the reflecting or penetrating light."

"The perception of colour depends on the source of the light. The sun is our most important source of light. Daylight is rich in blue tones. In contrast the standard light bulb does not contain much blue or violet but has a great deal of yellow, orange and red. Sunlight has a more golden tone. When it falls on fresh snow it looks more yellowish while fresh ski tracks cast a blue shadow because of the pure light from the sky."

The making of Blown

THIS MONTH'S SPOTLIGHT IS ON BLOWN BY SAMUEL WILKINSON - A PENDANT THAT COMBINES TRADITIONAL CRAFTMANSHIP WITH DIGITAL TECHNOLOGY.

Blown is a mouth-blown glass pendant with a quilted pattern imprinted on the surface. The pendant was conceived as an exploration of the reflections, distortions, and refractions of a light source when surrounded by patterned glass. Combining traditional craftsmanship with 3D computer software, Samuel Wilkinson structured the metal mould used to imprint the diamond shapes onto the glass 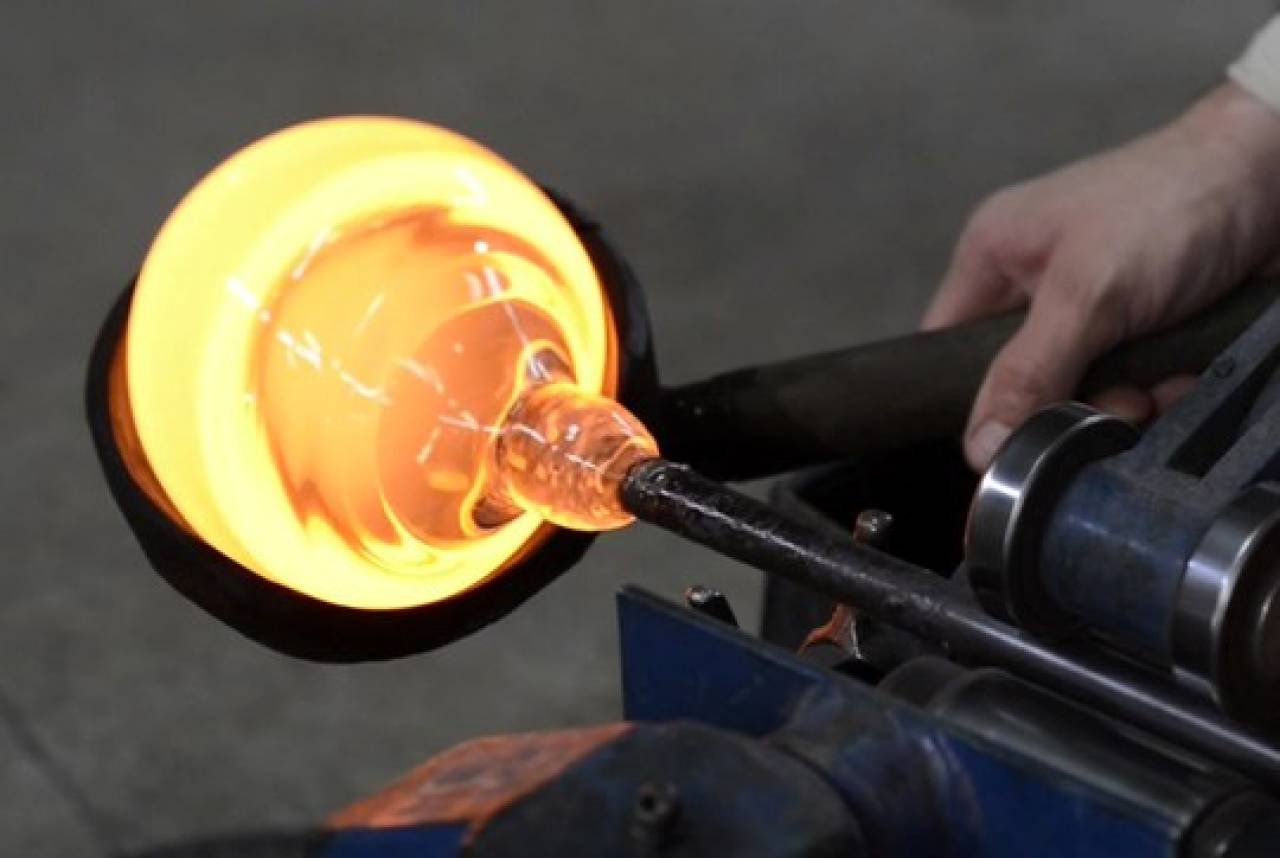 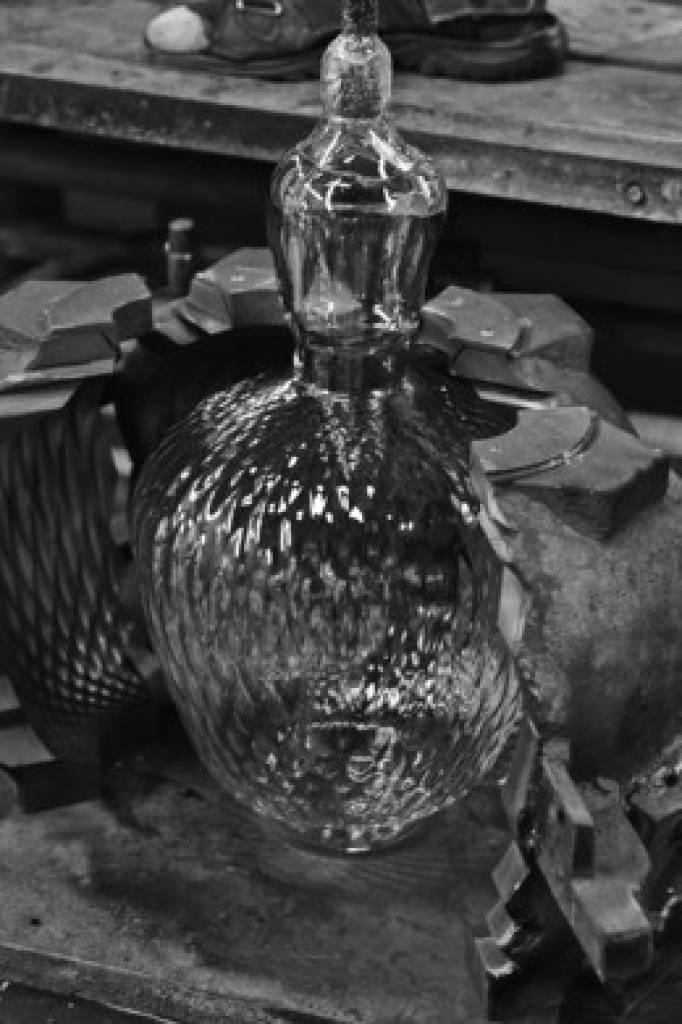 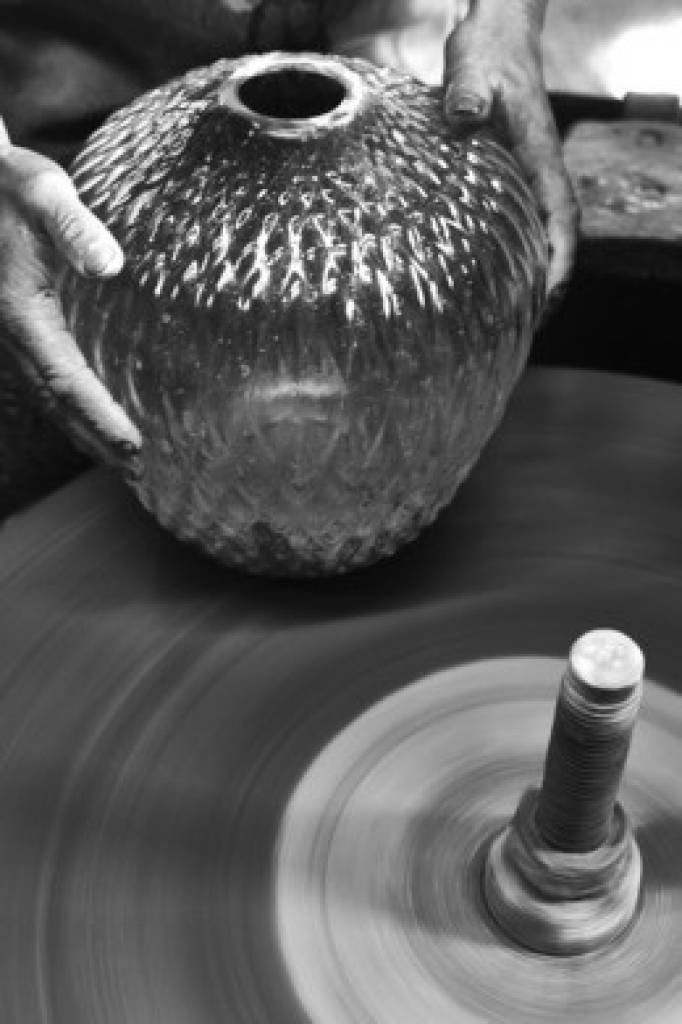 Molten glass is inflated and shaped using traditional glass-blowing techniques and then inserted into the mould while still hot. The mould imprints the pattern onto the glass, then once it cools the shade is sanded and cleaned. 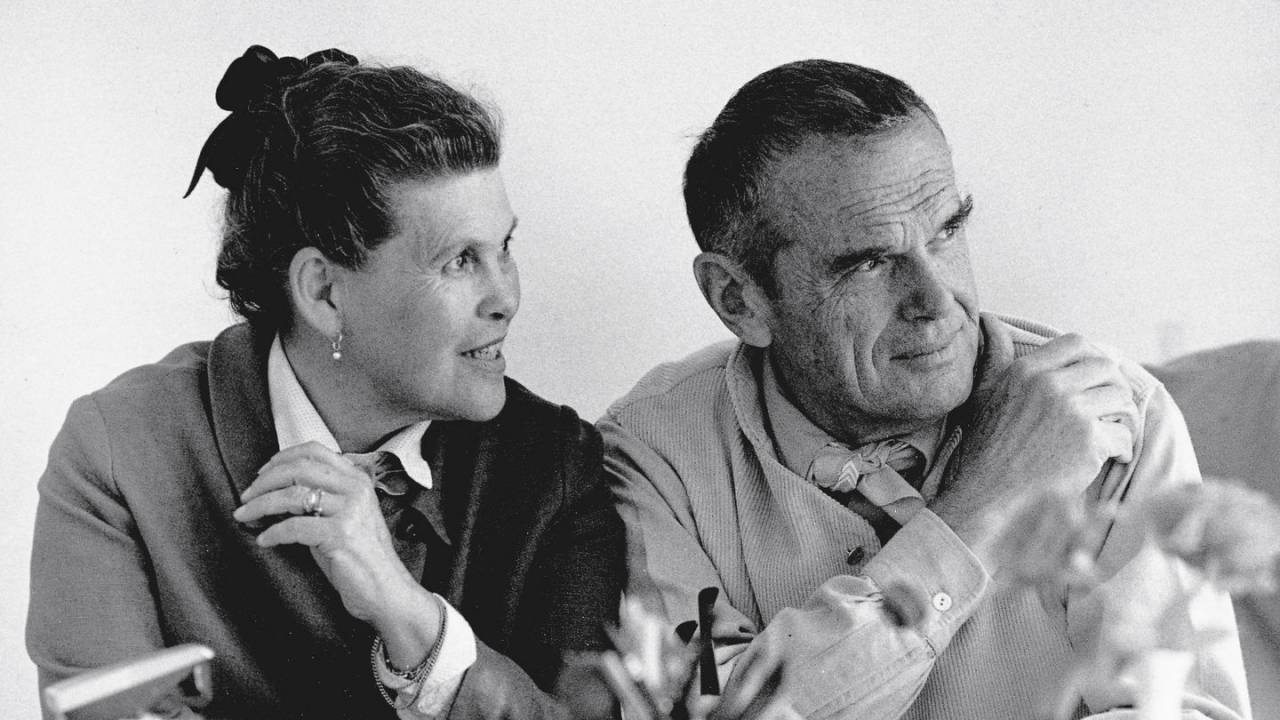 Charles Eames, born 1907 in St. Louis, Missouri, studied architecture at Washington University in St. Louis and designed a number of houses and churches in collaboration with various partners. His work caught the attention of Eliel Saarinen, who offered him a fellowship at the Cranbrook Academy of Art in Michigan in 1938. In 1940, he and Eero Saarinen won first prize in the 'Industrial Design Competition for the 21 American Republics' - also known as 'Organic Design in Home Furnishings' – organised by the Museum of Modern Art (MoMA) in New York. Eames was appointed head of the industrial design department at Cranbrook the same year.

Ray Eames was born as Bernice Alexandra Kaiser in Sacramento, California, in 1912. She attended Bennett College in Millbrook, New York, and continued her studies in painting at the Hans Hofmann School of Fine Arts until 1937. During this year she exhibited her work in the first exhibition of the American Abstract Artists group at the Riverside Museum in New York. She matriculated at the Cranbrook Academy of Art in 1940.

Charles and Ray Eames married in 1941 and moved to Los Angeles, where together they began experimenting with techniques for the three-dimensional moulding of plywood. The aim was to create comfortable chairs that were affordable. However, the war interrupted their work, and Charles and Ray turned instead to the design and development of leg splints made of plywood, which were manufactured in large quantities for the US Navy. In 1946, they exhibited their experimental furniture designs at MoMA. The Herman Miller Company in Zeeland, Michigan, subsequently began to produce Eames furniture. Charles and Ray participated in the 1948 'Low-Cost Furniture' competition at MoMA, and they built the Eames House in 1949 as their own private residence. In addition to their work in furniture design and architecture, they also regularly turned their hand to graphic design, photography, film and exhibition design.

In 1957 Vitra signed a licence agreement with Herman Miller and began producing the Eameses' designs for Europe and the Middle East. Charles and Ray Eames have had a profound and lasting influence on Vitra. It was the encounter with their work that spurred the company's beginnings as a furniture manufacturer. Yet it is not just the products of Charles and Ray Eames that have left a mark on Vitra. Even today, their design philosophy continues to significantly shape the company's values, orientation and goals.

This seminal influence is most clearly reflected in the question that is always asked at Vitra when making important design decisions: What would Charles and Ray say? Over the course of their shared lifetime, the couple gave their answers during trips to Europe and return visits to California. Since the death of Charles (1978) and Ray (1988), Vitra has remained in close contact with the Eames family, which now runs the Eames Office, regarding all matters concerning the preservation, further development and production of Eames designs. Vitra is the sole authorised manufacturer of Eames products for Europe and the Middle East. When you own an Eames product made by Vitra, you know it is an original. 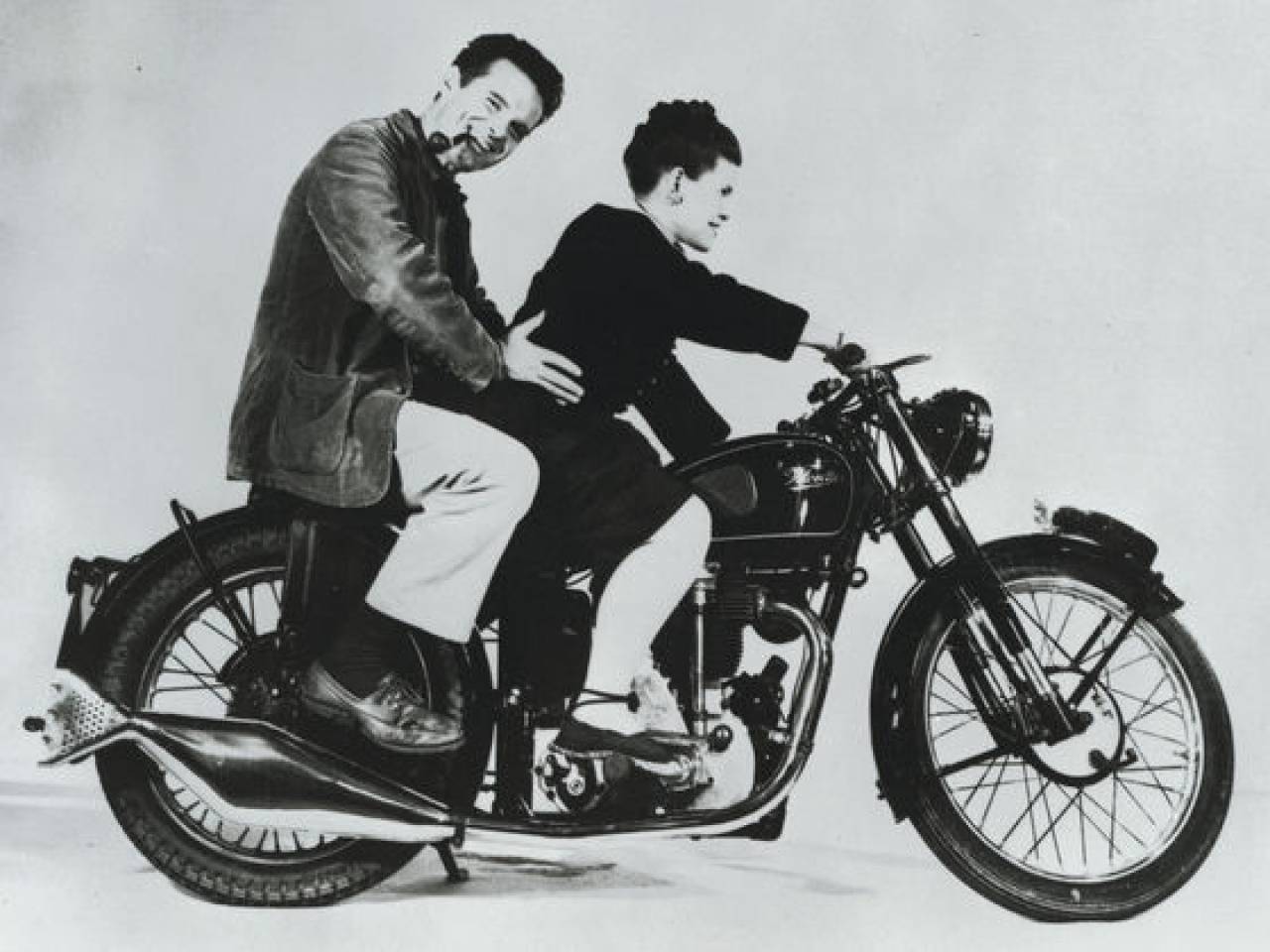 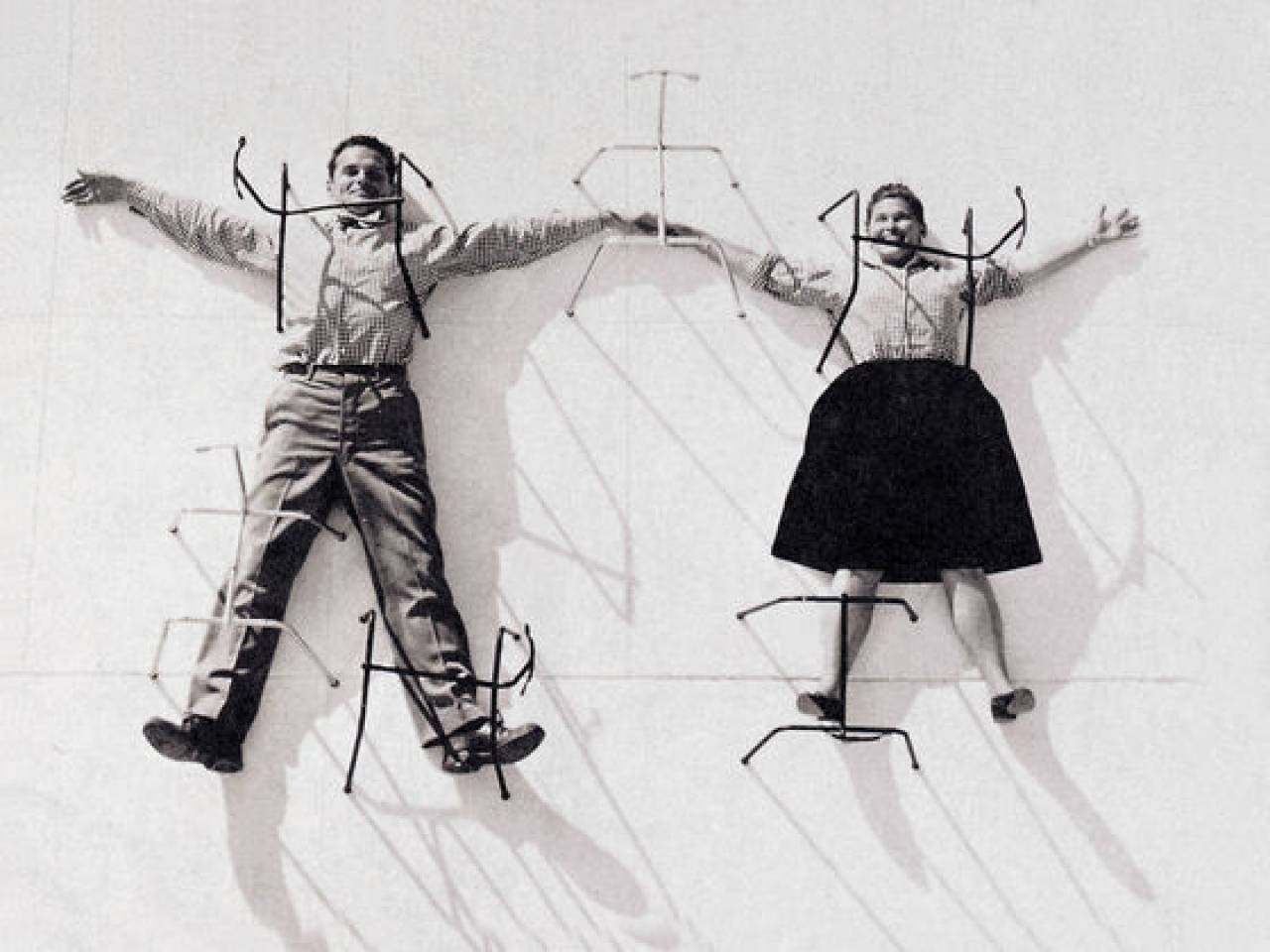 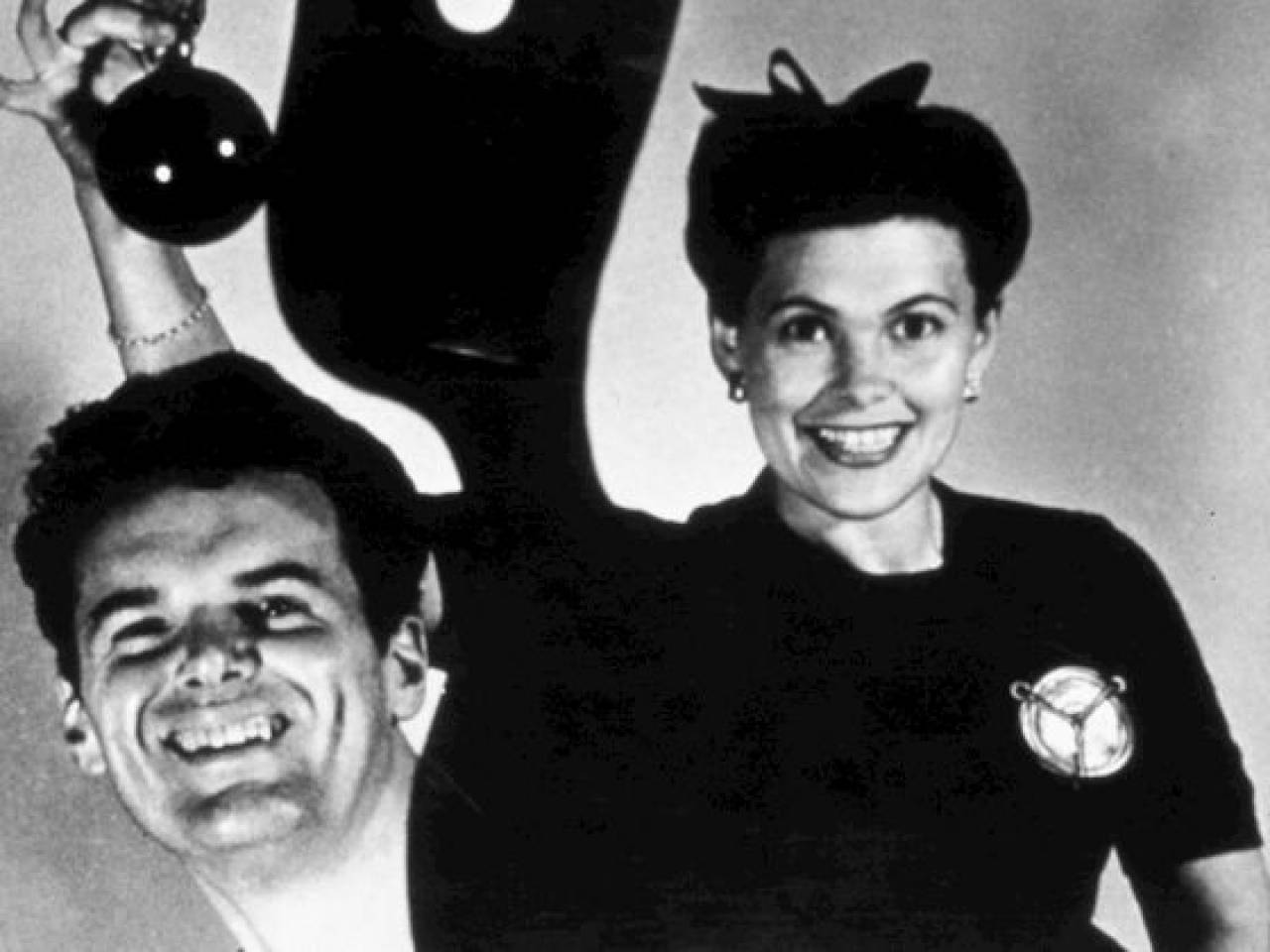